Goal of this activity:

Find/Develop/Define the required technology solutions (software, primarily) that are involved in transfer/storage/processing of the industry-common models for data & services (as agreed upon by the other CVII tracks).
This includes anything within the  "full scope" system (i.e. in-vehicle, edge & cloud), if it is software related to the common data/services model technologies.

Cross-platform support seems to be a general request but Linux is likely the dominant platform for developing / testing the code.

The term Technology Stack is used to describe all software that is related to the transfer and use of data and services that adhere to the common model(s).

How is the Technology Stack defined and developed?

- Through a combination of formal specification and open-source implementations, as chosen by the participants.

- Of course, by evaluating and selecting existing technologies where they exist, and making the necessary adjustments/bindings/plugins to make the common data/services models fit into existing frameworks.

- ... and developing the documents and software code that is missing.

For now all known parts are mentioned.  Overlapping initiatives ought to be possible to combine, to work towards a single consistent full-stack design.

The purpose of the technology stack is to lead us (the automotive industry) towards a reasonable selection of solid core technologies without trying to support everything under the sun.  In other words, there might not always be one selected choice in the software solutions, protocols, etc, but there should still be only one choice for the underlying data/services model, according to CVII goals.

A listing of conversions like this might look like a anything-to-anything approach, but it should be clear that the goal is not to create that, as explained in the previous section.  Instead, it is to make sure there are solutions to hook into technologies that are strongly desired, or unavoidable legacy.

It can be useful to refer to a shared understanding CVII Tech Stack Terminology.  Make sure you provide your input to these terms.

A1)  Partial system diagram (primarily representing an in-vehicle, possibly a single ECU, but terms are generic and components could be reused in a different setup) 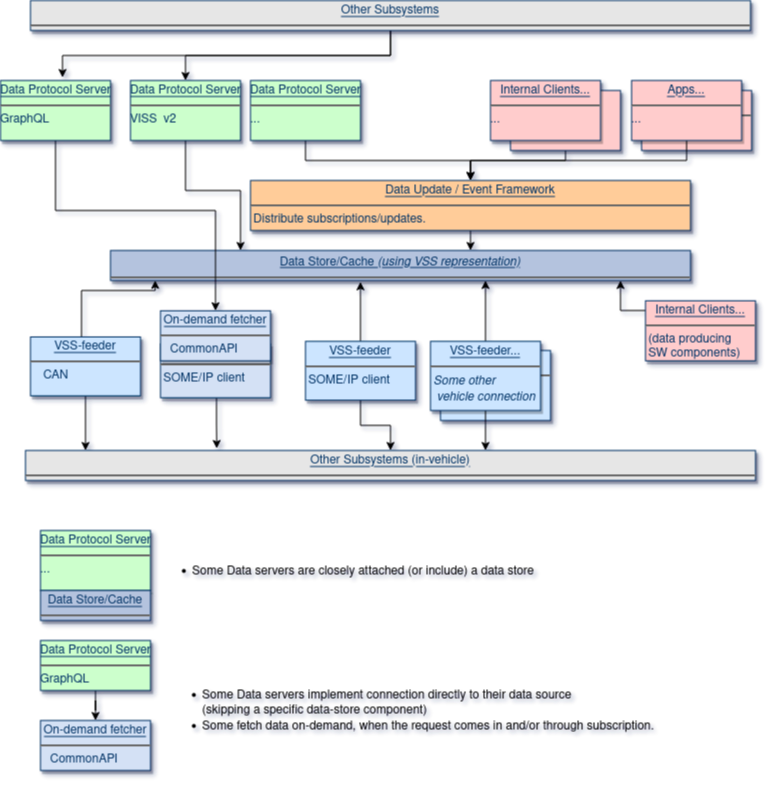 Source file for this diagram is here:  It can be imported into https://app.diagrams.net/ and edited again.

The best representation at this time is the Covesa CCS Project Reference Architecture.  NOTE: Be aware that the technologies mentioned therein are not set in stone.  Rather, this page represents a broader view of the variation of software components/protocols/etc. that may apply.

This is intended to become a relatively complete list of needed deliverables.
Add to it, if some technology you need is missing.

Note: Conversions to other formats are done to extend VSS with additional features , or to hook into useful existing technology that happens to consume another input format.

Note 1: This is different from the VSS catalog in that it does not define the signals, it defines how to transfer (or store) measured values of those signals.

Note 2: Several of these are generic technologies that could be use any number of ways to transfer data (e.g. JSON).  The purpose of this work is to define a single canonical definition for each such format

Note: Some of these will require using a serialization format to define the payload.  Others may bring/define their own formats.

This is a list of software projects that do somewhat more than just a "data protocol" but are still involved in defining data exchange.
Note: Some of these define their own protocols, or the protocol is hidden (abstract) behind the framework APIs.

Note: There are many choices here.  Some might simply implement a simple in-memory table.  Others define themselves as "databases" or "key-value stores".

A number of choices are possible here and there are no plans yet to prioritize a particular one at this point.
Rather whichever existing implementations become known / implemented first, ought to be listed here.

Note: Conversions to other formats is done to extend it with additional features or hooking into existing technology.

Note 1: In contrast to VSS, for VSC/services we did not separate the serialization definition from the protocol.  It is simply understood that each RPC protocol will define the wire-format of its method-invocation request and responses as part of its specification.

Defining such a protocol is being discussed, to mirror the definition of VISS for data.  A definition project has not yet been launched since it relies on the VSC-language and semantics being solidified first.  (It may of course decide to reuse existing definitions, including some of the ones listed below)

Noteworthy software frameworks (typically with scope beyond data only), but to include VSC

Other things mentioned for completeness

Shortlist, prioritized projects
(2021, not clear if it is still representative)

for further, potential examples, refer to the table based overview below.

Which technologies come immediately to mind?

A lot of communication related technologies were investigated in the Generic Protocol Evaluation project during 2019.
A set of reference links are here : List of relevant technologies

(RED is not existing or not yet clearly defined).  (The rest exists already) 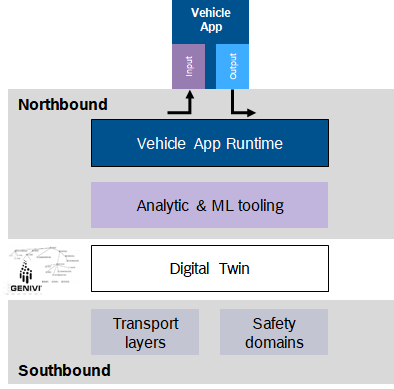 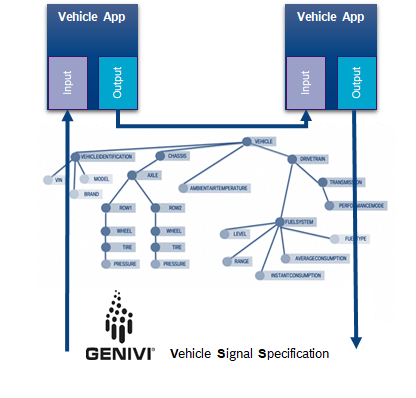