Birds of a Feather (BoF)

May 2021 All Member Meeting

May 2019 All Member Meeting

What is it and why?

The VSS Taxonomy defines what data "entities" (Signals and Attributes) we can deal with, and are used in the protocol(s) defined by W3C Automotive Working group, as well as other initiatives inside and outside the vehicle.

But in addition to VSS itself, we need to define the data-exchange formats for measured values of those Signals.  This starts by defining terms, but quickly develops into defining one or several variants of the actual message content format, whether in JSON or other.

Data formats sometimes overlap protocol definitions because some protocols (but not all) define the data format in its specification.  VISS / W3C Gen2 is an example of a protocol definition that defines both the protocol interactions between client and server, and the data exchange format that fits the VSS model.  Ultimately, any chosen (stack of) protocols must at some point define the transferred data formats, otherwise no understandable exchange can be had, and this page is intended to support the development of such a definition.

Looking at a wider set of protocols it is clear that we have some more work remaining.

This page is currently concerned with the payload, and not a full protocol definition, so no further definition of Request or Job is made here.

=   A delivery of data sent at a particular time.

This will likely need to include some metadata regarding the request:

Following input given in the W3C data TF:

Why not just use a single record type (superset of all functionality)?

A: The reason would be to optimize the performance and bandwidth.  In other words, don't transfer what is not needed for a certain case.  If a timestamp is not needed, we should make sure we support transferring data without providing a timestamp, for example. Hence, this proposes a simple class hierarchy of sub-types of Record.

+ Record types which specify the signal name inside:

Record types which specify the geospatial position in addition to the time value:

(N.B.  In this proposal, Geospatial records always include a time stamp, because it seems to be the overwhelmingly dominant usage, but variations without time stamp would of course be possible)

NOTE:  The exact format of time stamps (and any other data representation) may differ when these concepts are translated to different protocols or languages, as long as the original meaning as required by the VSS specification remains.

One option is to use a string and it is then recommended to use the ISO 8601 standard format, with fractional seconds (e.g. microseconds) and always UTC (Zulu) time zone.

For some purposes more efficient binary encodings should be considered, such as an integer of appropriate size, usually containing fractions of seconds relative to a known starting point.

Note that values in a Snapshot need a record type that specifies the signal, i.e. (a subtype of) SpecifiedRecord, since different signals are included in the same message. 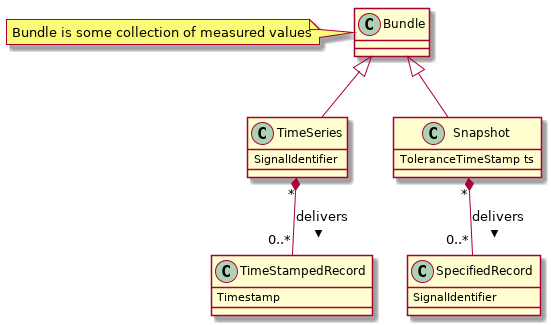 Above we used a simple JSON encoding for the data (as an example). A more space-efficient binary format is also possible, and here we can reuse existing technologies (AVRO, Protobuf, Thrift, CBOR, ...)

Note that the AVRO schemas are also written in JSON, so unlike the examples above this is not an example of the data content →  JSON is used here to describe how data will  be structured.
The data content is stored/transferred by AVRO implementations according to the schema.  It uses an efficient binary encoding for the values.

... where Value is a union of all the possible VSS types.
This is a little convoluted because values can be any plain data type, or an Array of such datatypes: